The Careless Motion project, founded in 2016 by Violette Wanty and Alexandra Laya, brings together diverse artists to create common works in an extreme metal universe. Artists from any discipline are welcome to join the collective: musicians, compositors, writers, dancers, photographers, tattooists , painters, sculptors… The aim is to create both visual  and  musical elements in a collaborative way. For each creation, the feelings expressed by an artist depend on his own experience and also on the contributions of the other participants. We believe that mixing the senses and the actors in the creative process enhances the emotive transmission as well as the impact of the art. The productions are freely shared online – with free videos, pictures gallery and music streaming. Once a sufficient number of creations and participants have been included in the project, live performances and exhibition events will follow.

If you are an artist interested in the project, do not hesitate to contact us ! Also, you can support us by donating towards the cost of our productions. 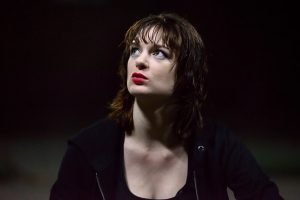 Violette Wanty is a multi-disciplined artist from France. She has worked with a range of different professional companies for  over six years, mostly as a dancer, choreographer and singer. She started dancing at the age of four and, following her growing passion, left her family at the very young age of thirteen to join the prestigious Dance Conservatory of Paris. At the same time she felt that extreme metal music was an incredible vehicle for emotional expression. She discovered similarities in expressing herself through metal music and ballet dance, and wanted to use both arts as complementary universes. She started to work on her scream and, soon after, joined the black metal band Oxymor as lead-singer in 2006. They recorded an EP and an album – “Passé décomposé”. Oxymor toured the north of France until disbanding 7 years later.

At the same time, she pursued her professional dancer career joining the Junior Ballet of Geneva, followed by the the famous DCA Philippe Decouflé’s company in 2012. Violette is now taking part in many productions as dancer, choreographer, singer, flute player, comedian, acrobat and even pole dancer! She travels on international tours and performs in prestigious venues all around the world.

In 2015 Violette joined the Bloody Rabbeat, a deathcore metal band. Her willingness to mix all her expressive languages led her to produce a dance and music video with Alexandra Laya.  Off the back of its success they decided to push further with their shared dream. To this end, they founded a multimedia project focused on the extreme metal universe;mixing every kind of arts: the project Careless Motion. 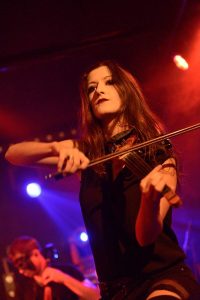 Alexandra Laya is a French violinist. With over fifteen years of classical training in the music conservatory, she also credits influences from jazz, gypsy music and metal.

Wishing to broaden her means of musical expression, Alexandra acquired her first electric violin at the age of fourteen and started to explore metal music. Few years later she played in a Dream Theater cover band, where she arranged the keyboard parts.  Then, Alexandra went on to become a member of the progressive orchestral metal band Irradiance. She is now touring with them throughout Europe to promote their first album Dissidence. In 2016, she recorded an electric violin solo for the Vivaldi Metal project.

Continuing with her, the desire to push her violin’s limits, Alexandra started experimenting with playing Meshuggah’s music with a violin tuned one octave lower than normal. Seeing promise in this approach, she joined Violette Wanty to fuse several art universes and extreme metal music in the Careless Motion project.

The association aims to develop and promote innovative and original artistic projects related to the Metal/Rock universe.

The means of action are consist primarily of the following :

We acknowledge Mario and Tamara for the help with communication !